Because fuck you, that's why!

What if the world finds out I'm a fraud

I can honestly look you straight in the face and tell you that the only thing I fear anymore is finding out that I actually am a fraud.

Has your entire life been a lie?

Why do we walk around pretending like the whole world is telling us the truth when most of the time, we won’t even tell ourselves the truth?

Understanding power: Why being stupid is in style

The power of words

Writing is a form of art where each observer is required to participate actively in order for its true impact to be felt. The reader must give in and allow the author access to their brain. Leaving them completely exposed, if only briefly, to the mind of another man.

The desire to create

Just as you feel the sun when you step outside each day, the desire to create constantly tugs at your mind. As if it were the gravity of your soul pulling you towards your destiny.

Understanding information as a currency

Forward thinking concepts about how information is being positioned as the ultimate currency.

Why you should avoid fitting in at all costs

Instead of promoting the exploration of a deeper inner-consciousness (one where we might actually find ourselves) we promote a collective unconsciousness. One that that has infected our entire society.

The Choice We Face

Learn more about the choice we face as it relates to individual liberty and creative freedom. 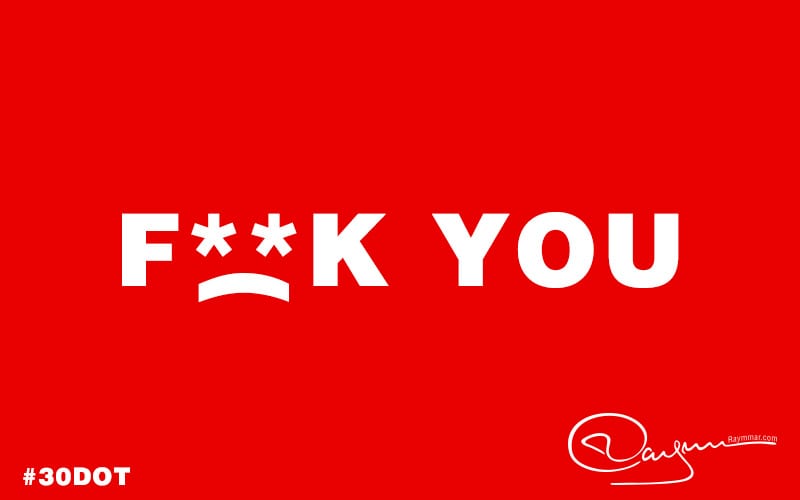 Do not go where the path may lead, go instead where there is no path and leave a trail.

First of all, lets set some ground rules!

The word “fuck” is in the title of this article! So If you keep reading it and then decide to bitch at me for using it again later, then that’s on you. Don’t come crying to me in the comments or on social media about how inappropriate my use of the word is or how much it offends your sensibilities.

After all, If a couple f-bombs are all it takes to keep you away from what I am about to say, then imagine what other wonders of the world you are missing out on while hanging from that noose of naiveté.

That’s right, I said it! And you’ll be lucky to get one or two people throughout the course of your life who are willing to be as honest with you on a consistent basis as I am about to be.

The truth is that everything is not going to be alright. Things are not a-okay, and the world we live in is full of people who will fuck you over as soon as you give them a chance. People who will hand you a dollar bill to help you pay the rent while stealing your house from the guy who rents it to you.

People who care about nothing more than using you as their philandering whore. Who give you just enough to keep you happy, and feeling free. A type of 21st century slavery. Something that will leave generations to come as slaves to a silent master. And do you know why?

Because fuck you, that’s why!

Our country was founded by people who felt that freedom was part of a natural law. A right that should not be intruded upon by men. But the country they gave us has been overrun by people who have strategically played the system on both sides in order to control a game bigger than you might even be willing to consider. And they are doing it all right under our noses. Do you know why?

Because fuck you, that’s why.

The books have been cooked for a long time now and the real reason that things are not getting better is because as a species, we need to be pushed to the brink in order for us to break. Its a fundamental flaw of human nature. One that leads us to fall prey to the pied piper time and time again.

So I know these words might piss you off, but you know what… I don’t much care. And do you know why?

Because fuck you, that’s why.

For not seeing that the the people in control want you to hate me. For letting them make you think you do hate me. Not because of who I am, but because of the labels they have given us. For not seeing that they are in control of our education and the entire national conversation. Only letting us know what they want us to know and burring the rest with streams of misinformation in order to further confuse us.

For not seeing how easily humans are controlled on a mass scale. For not understanding the fundamental nature of our educational, religious, media and government institutions. For letting them pass off their own doctrine as that of the majority.

For going in to work each day and selling your soul to do something you hate. For not selling out to your passions and for not chasing your dreams. For not being willing to create an opportunity if your path is not clear. And for hating those who do.

For not playing more. For not spending more time laughing! For acting your age. For living life as if you were on a stage. Always on call, always taking the easy path to ensure you don’t fall.

For thinking you deserve something. For thinking that because you had something yesterday it’s still yours today, or that you won’t need to keep busting your ass in order to keep it. For not realizing that nothing is permanent in this life, and that the world will erase you as fast as you let it.

For not recognizing that our society is still in its infancy. For not knowing that the American experiment was a gamble on mankind as a whole. That it was an all-in bet on whether or not man could rule themselves.

For not understanding the consequences of giving the government overarching rule and control of the means of production. For getting mad at lobbyist in Washington but allowing them to enter your house in high definition for hours a day in the form of entertainment and news. For being a hypocrite and not even knowing it.

For knowing and still standing by. For not participating in local elections. For not looking for something more than superficial. Fuck you for not seeing that our society has been designed to do exactly what is happening right now. For not seeing that the rug is about to be yanked out from underneath our feet and put us on all on our asses.

For thinking that we can give the same assholes who drove us into this collapse, the keys to the tow truck that is supposed to pull us out of it. For not seeing that Democrats and Republicans are both pieces of the same puzzle. A large game of chess that has been played on a global scale. One that will never end. One that will be played over and over again, everyone available for sacrifice. Other than the royalty that is.

So fuck you for all of that. For being a doormat. For lying there on the ground so flat. For watching idly by as the the world falls down. And for sitting quietly on the leash while continually being pulled around.

And fuck me too, for blaming you. Because if it’s true for you, then it’s true for me too. Because we all sit around and pretend like it’s not our fault, but in the end, who else is there?

So… What the fuck are we gonna do about it?

Raymmar Tirado
Stuck in love. The one that got away...
More from This Author
Empty Throne
Learning To Let Go
Am I responsible for the drowning death of a 13 year old boy?
What If I Told You
God sent me to piss the world off
Why you should avoid fitting in at all costs